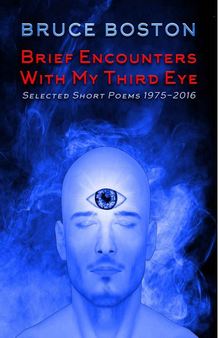 Bruce Boston is the first Grandmaster of the Science Fiction Poetry Association and of late he has been producing a series of masterworks exercising his muscles as the preeminent speculative poet in the world.  In 2013 his book Dark Roads: Selected Long Poems 1970-2013 was published by Dark Renaissance.  Earlier in 2016 the poetry novella Sacrificial Nights written with Alessandro Manzetti was published by Kipple Officina Libraria.  And now, Brief Encounters is here providing a masterwork focused on a third length for poetry.  One can only imagine that poetry novels and tetralogies are on the horizon.  The book is well produced by the publisher, and nicely illustrated at each section by Luke Spooner.  The reader may need to adjust slightly to the fact that poems tumble over each other with the next one following the previous on the same page after two skipped lines.  It is easy to imagine each section written down one long sheet of paper like the original scroll version of Kerouac’s On the Road.

Brief Encounters... is divided into sections by decade with the 1970’s and 2010’s getting modest representation, and the other three decades represented by enough work to make each their own poetry collection.  Of course, part of the purpose of this sort of masterwork is to allow the reader to see the poet developing, and that definitely happens with this book.

Poetry can be a film clip or a still photo.  It can be the scent of an orange, or the crisp immediate misdirection necessary to conjure emotions too subtle to have names that can found in a dictionary.  The early poems are like that for me.  The 1970’s section opens with the light and elegant “Artist as Owl” and moves to the first of three longer poems about The Alchemist, works that explore the transmutation of emotions to words, as well as element to element.  The 1980’s section moves from the other Alchemist poems into the beginnings of the epic series of poems about the wives of monsters, supernatural beings, and other denizens of F/SF/H.  The poems in the series are all formatted as “Curse of the _____’s Wife” and they are rich material.  All forty to that date were collected into The Complete Accursed Wives in 2000, though a few new ones have appeared since along with a parallel series about accursed husbands.

Poetry can respect the walls of the individual, or invade the hero, the reader, the writer, the victim, or anyone else so unwise as to enter the poem.  It seems to me that the poems for the 1990’s go in this direction.  Consider “Interior Monologue with Mirror” which opens:

The cartographer who dwells behind my eyes,
who maps the continents of desire and imagination
for the navigator who charts the course of dreams
and nightmares for the pilot who traverses
the landscapes of time and illusion

The invasion will be mapped and staffed, and recorded for posterity.

From “My Wife Returns as She Would Have It”:

I am a fifty-six-year-old man suddenly
kneeling on the cement spilling out
his love and regrets to a lone insect
he hopes is a reincarnation of his wife.

Toward the end of the 1990’s section a thread of recursive self-reflection rises.  I feel that these lines from “Conditions of Sentient Life” might be one of the best descriptions of speculative poetry that I’ve read:

The soothing balm of dreams.
A share of nightmare terror.
[...] recycled from the stuff of stars.

“Curse of the Bandersnatch’s Wife” reflects back on Lewis Carroll.  “The Poetry of Science Fiction” ends the section with a poem composed entirely of the titles of books and periodicals.  Between those two poems, “Spacer’s Compass” charts out Boston’s personal journey through speculative poetry:

Old I grow... [...]
and still I tramp the stellar routes [...]
fixing no frame of reference
beyond the passage itself
adrift in the passages
yet to be taken

The section of the 2000’s opens with “I Build Engines”, an extended metaphor poem in which the engines equate to Boston’s poems.  Each stanza outlines a dangerous place that his engine/poem has taken readers.

Immediately after this poem, the section changes becoming a little more accessible, containing more concrete detail.  While the significant majority of Boston’s poetry is narrative, at least in the sense of a sequence of related events moving through time, starting with the second poem of this section the poetry becomes more filmable.  (Or more a possible subject for animation.)  Part of this is the result of less use of the passive voice.  While the passive voice is out of vogue, it is useful for creating distance, and can be quite poetic.  Greater use of the active voice is usually the alternate option to the passive, but at times in this section the poet moves to the ‘would’ voice which may be underused on the whole.  Examples of the ‘would’ voice can be found in the four poems (of at least 37 to see print so far) in the “_____ People” series including this from “Knife People”.

If knife people
were the world
it would be
full of holes
and torn curtains,
green harvests and
bloodied walls.

When you are sharp
you have to cut.

I should note that throughout Boston has moments of humor, that are sometimes easy to overlook as they can blend in.  Consider this from “Relative Weights and Measures”:

My unconscious mind
proves too large
for the ten gallon hat.

The brief section for the 2010’s overtly moves toward the musical and the surreal with poems from Boston’s series exploring those elements.  It ends with this lovely thought about speculative poetry readers that seems appropriate to close the review:

...those of a certain

mind and heart who listen
hard enough to hear it,
never completely sure

what kind of music it is,
yet convinced it is the
one they must dance to.

Originally appeared in the SFPA Reviews Page Winter 2016/2017, and excerpted in Star*Line.