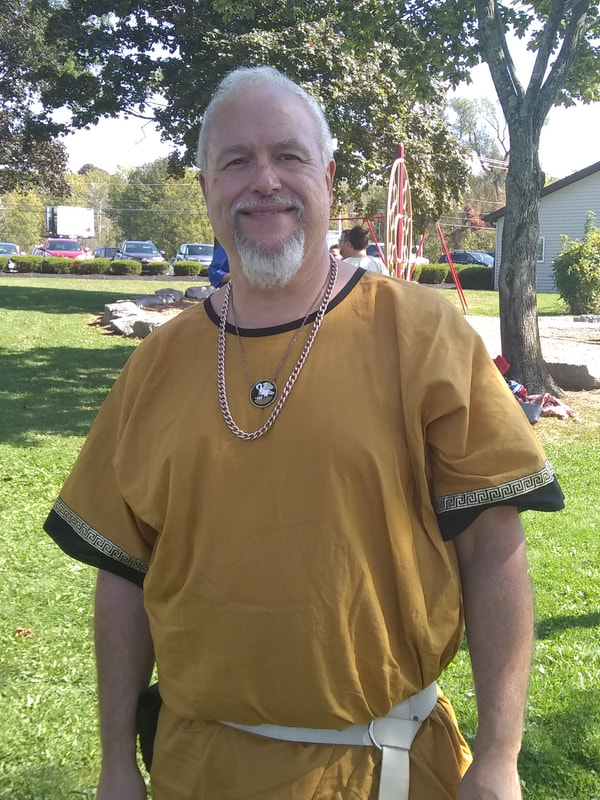 In the late 1970's we had a lot more time to kill in the SCA.  Most of the SCA hadn't been invented yet.  One of our pastimes was creating long involved persona stories.  This was a time I was much taken with the Icelandic sagas and had taught myself to read Old West Norse to read them in the original.  No, I don't remember a word of it now.  For that matter, I don't remember much of the very long origin story I created.

Fortunately, in January 2005, I wrote down what I could remember of it.  Here it is:

"Haakon Grimson’s mother died in childbirth, and his father was an abusive drunk.  He grew up eager to leave Norway.

In 1085, representatives of King Olav III of Norway recruited the young teenager to join Danish forces being mounted to invade England.  Haakon joined a flotilla of almost a thousand viking ships at Skibsted Fjord in Denmark.

Unfortunately, King Knud of Denmark was repeatedly distracted by happenings in the south, leaving the invasion force to amuse themselves.  This was Haakon’s first taste of the glories of non-combat.  The taste has returned at many Pennsic bridge battles since.

After more than two months of waiting around, the invasion fleet broke up, and Haakon hitched a ride to Scotland where he saw his first action as a mercenary with a great axe.  The Scots corrupted Haakon to Hak.  He married a woman from Caithness and drifted down into Eastern Danelaw where he settled in East Anglia.

He worked as a mercenary, and as a traveling merchant. Some regions would not deal with him because he was a heathen, so eventually he underwent the ceremony of pre-baptism, and chose the Latiny sounding pre-baptismal name of Andreas.  This allowed him to buy and sell with Christians.  [The "with" is important.]

He was always poor, but he was a fine fighter, and an adequate politician so eventually he was knighted and ceded a tiny bit of land not far from Thetford.  He outlived his wife, sold his land, and spent his last years wandering the British Isles and the SCA aimlessly, drinking beer, pondering philosophy, and muttering to himself.

For the record, there was a historical Andreas Haque who is recorded in history as having fought in the Deed of Arms at St. Inglevert in March 1390.  The most famous account of this is by Froissart, but my namesake is not mentioned in that account.  Instead he is mentioned in the Chronicle of the Monk of St. Denis.

My thanks to Duke Finvarr for the historical references.