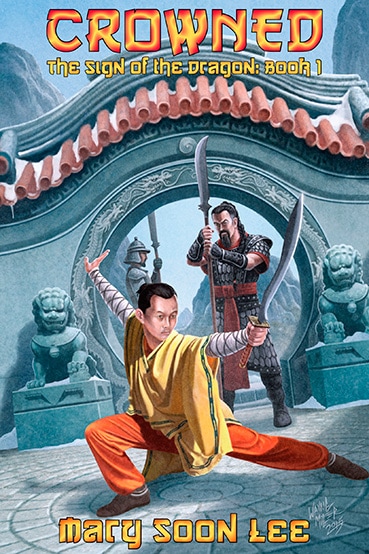 Crowned, by Mary Soon Lee, is a richly told fantasy novel set in ancient China that just happens to be formatted as a series of long, easy-to-read poems.  In fact, the first poem in the book won the Rhysling Award as the best long speculative poem of 2014.  Don’t let the format fool you.  This is the best fantasy book I’ve read in at least twenty years.
As sometimes happens in creating a new world, the book starts a little slowly introducing Xau, the new king of Meqing, and his royal household.  The new king is scrawny, cranky, kind, brash, and wise in turns.  Mostly he is a work in progress.
This is the story of Xau’s selection as king, at the age of 16, and the first five years of his reign.  It includes major events such as his first war as king, and coping with a natural disaster striking in his kingdom.  It includes small moments and personal moments, and a lot of people I’d like to meet.  The book circles around its subject matter coming at it from different directions, and for that purpose the structure as a series of long poems is strong.
The nature of poetry is to distill language.  The result here is that the 170 page book reads faster than prose, but also deeper.  There are many selections where I immediately reread sections to explore the connections, and really, just to enjoy the many emotional shivers the book sent through me.
Please note that the book includes adult themes including violence and action, and tasteful sex scenes.  Sometimes readers assume such things are absent from poetry.  And sometimes book-buyers assume that a book about a 16 year-old (when Crowned starts) is a young adult book.  There are characters old and young.
I am the father of four children, and the poem “One Week” about Xau managing to find one week to enjoy his three year-old son stops me cold every time I read it.  I am no king, but all parents are trying to run the business of their personal kingdom, with all the confusions and demands of a country.  The poem nails the miracle of navigating all that and still finding time to be a parent.
The book is billed as ‘The Sign of the Dragon: Book 1’.  I’ll have book 2 on pre-order.

Previously appeared on Amazon and Goodreads