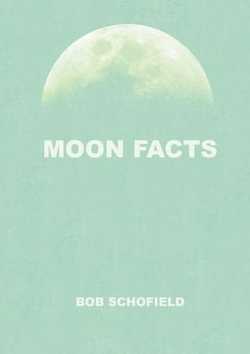 Moon Facts is one of the three 2015 winners of the Nostrovia! Chapbook contest which results in a limited print version of the book.  After that is sold out, the book is available for free online as a PDF.  Two poems from the book were nominated for 2015’s Pushcart Prize.

There is not much information readily available about the author other than his publishing record.  The book contains 24 pages of poetry, nicely designed, with illustrations.  Perhaps a quarter of the poems are prose poems.  All poems are titled “FACT #__” fill in the blank, and they are indeed, little known facts about the moon, or as the book styles it THE MOON.

To be clear, these are poems rich in figurative language, and well outside any semblance of realism.  For example, FACT #011 includes:

Because this is still
the dawn of time

and the floor is lava

Portions of the book lapse into nonsense and word salad, and somehow I loved it anyway.  For example, this from the prose poem FACT #284:

“THE MOON travels exclusively by old wooden ship.  Now it is nighttime in Trinidad.
A one-eyed tree sits smoking a pipe.  Two men pledge their love to the same parrot.”

The sense of humor that runs throughout is best served in the author’s deadpan delivery.  There are a few examples of him reading poems from the book posted on the homepage for the book.

Overall I generally lack the patience for extended bouts of such nonlucid writing, but this book worked for me.  In fact, it was so much a sort of delicious indulgence that I’ve read it at least four times already.  It is not the kind of book you stop in the middle of.  Its rhythms exist not just on a poem by poem basis, but across sections, and across the whole book.  I would pay a good-sized cover charge to see the whole book performed at a poetry slam.  But it reads well, too.