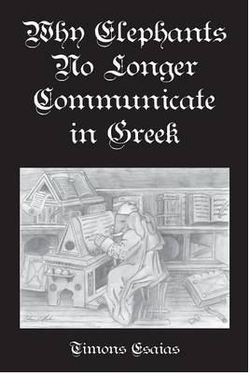 Timons Esaias is no stranger to the speculative poetry community having won the Asimov’s Readers Award (2005), been a finalist for the British Science Fiction Award, and having been nominated for the Rhysling Award five times, finishing third in 1997.  His poem “Regarding the Mastodons” just won the 2016 SFPA poetry contest Short Form category.

In Why Elephants..., Esaias has assembled a fine book of poems rich in mystery and dislocation, elements generally appreciated in speculative poetry.  This book is a masterwork that won the 2015 Louis Award.  By my highly subjective count, about fifty pages are clearly speculative, and another fifteen pages are somewhere in between spec and non-spec.  The book is organized into four sections and to a lesser degree the content is organized by topic with large sections on baseball, food, or the elements of poetry.  Some series of poems such as ‘All the Important People’ and the elephant poems are spread throughout.

Esaias understands that poetry, like most intoxicants, is highly habituating.  It needs to be changed up to keep the good brain chemicals coming.  While themes may be gathered at times, styles and levels of poetry are distributed.  Given that Esaias labels himself a satirist, satire becomes a recurrent flavor of poetry.  Other times pragmatism.  Esaias often walks into a place I might call ‘science realism’ to parallel ‘magic realism’.  For example, “Supplementary” takes overly literal interpretations to the names of some elements such as recommending supplements of Thorium for those “who hammer all day long” and suggesting “suppressing Californium—for reasons that need not be enumerated.”

Esaias is well-read in history and blends it into his poetry both in detail, such as the outstanding title poem, and in atmosphere such as “Nudge” which is a form-letter designed to query a submission status, but written for use in ancient Rome, and translated to English for our use.  In a sense, the historical is an overriding motif, with a cover type font in a calligraphic style, and a marvelous faux woodcut illustration.

Esais also steps away from here and now in other ways such as “Awkward Stage” which is a classified ad for a young man looking for an “attentive tutelary deity; whom oak trees must be sacred to”.  “A Fire on Ganymede” starts with the things you can’t do on Ganymede and somehow moves to the Buddha’s opinions on fire and smoke.  Perception is altered in “Six Leaves on Shaded Elm” where the elms become “Faëry castle to the bee” and eventually “Babel of insects”.

If the poems referred to above sound interesting, you may want to read this book.  But be forewarned that it is diverse.  There are clusters of many different kinds of poetry here.  I find that to be a good thing, but if you like to flock your verse by similarity of feathers, (such as preferring all poetry in a collection be speculative) this might not be a good fit.  Otherwise it probably will
be.

Originally appeared in the SFPA Reviews Page Winter 2016/2017, and excerpted in Star*Line.