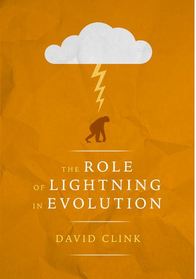 Lightning... is Clink’s fourth full-length collection, and the package is pleasing, printed in a small 7” x 5” perfect bound volume.  The book contains 51 poems in six sections.  I note that there are glitches between the contents pages and the contents placement.  Most of the poems are speculative, but not all.  For example, “Surviving a Canadian Poem” is delightful, but not speculative.  But it does provide the opportunity to point out that Clink often writes in a more literary vein which is reflected in the credits which list prior publications in prestigious literary journals such as The Literary Review of Canada, The Antigonish Review, and The Dalhousie Review.

Clink once wrote that “poetry is about the beginning & end of things—with the poet in the middle” (from “The Rutabaga Poet” which is not in this collection).  Some of Clink’s best work is when he puts a classic trope from the speculative genre into the middle of the verse, and looks forward and back from there.  For example, the award-winning “A Sea Monster Tells His Story” opens the book.  The titular sea monster is beached and humans are trying to save it while it tells of its life before and after.  I find the ending of the poem devastating.  Another example is “Tin Man” which opens section IV.  A sample reads:

Every one you ever loved is dead.
For a tin man, there is no life after this one.

Your world changed when a girl approached with an oil can.
If your lips could have formed one word, it would have been no.

“Skinchanger”, “Roc”, and “The Lady in White” are other fine examples of this sort of poem.

Another place where Clink’s poems excel is when he puts the reader into the poem, using “we” and “our” and often writing in the second person.  Consider the title of the poem “Mr. Sandman and the Tooth Fairy on the Morning of Your Death”.  “In Defence of Science” opens with:

When grief comes to you as Piltdown Man
a 100-year-old scientific hoax
[...]
I put out the usual place setting for him
and we share a meal.

The prose poem “A Natural History of Snow” includes:

You need to follow the giants’ tracks in the deepening snow, catch up to them, tell them there is still magic in the world, there is still love.  You want to walk among the wrecks, tell the sailors they are not forgotten.  You must find the rest of that alien insect whose fixed eyes cast a light on all that is solemn, unforgiving, and to try to free it, and if that is not possible, stay with it till the end, make it understand it will not die alone.

“Séance”, “Rock Candy”, and “At the Temporal Café” are other strong examples.

It should not be overlooked that while Clink often writes seriously and with power, he also embraces fun and is sometimes flat-out funny.  “Sixteen Colours” tells of an alternate world where they lack subtlety in colors while “Short Forms” is a world where they use “no initials, no contractions, no abbreviations.”

In the end, this is a rich and powerful collection from one of the powerhouses of the field.  I expect to see it mentioned come Elgin Award nomination time.